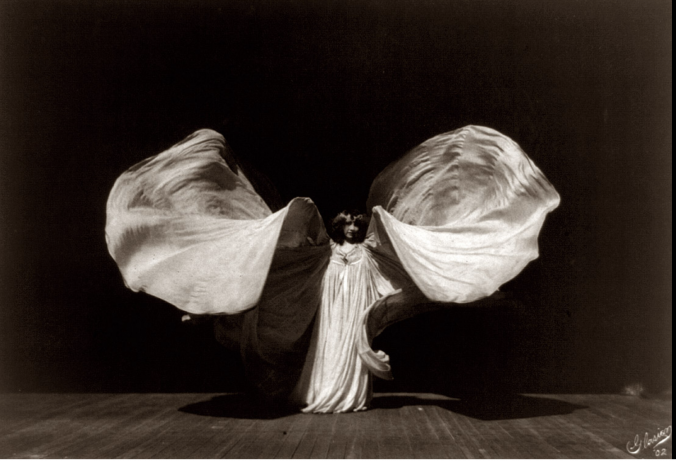 Aerated, peaked gossamer spoke to me in a new language created by fire.  Her dress, the flow of her gown, weave an illusion depicting fire’s animation.  Musical vibrations contort her muscular movements.  Satin skin floats under silk, enlivened by cones of light.  Her swerves recreate the pointed genius of a firestorm erupting into trains of heated blue isosceles, and spheres simulating the shape of a flaming blaze. Her alluring profile sweeps the air with sifting webs of lace, at once clinging to and repelling from her body, creasing the night sky with the marmoreal folds of fabric becoming the tremulous layered pastry of flame. There is silence in the crowd while a lone violin provokes her flights.  Faces beam in cellular light as her muscular legs and the air-occupied contours of her garment mimic the wind’s serrations into marigold flame as if driven by a hidden puppeteer drawing the wind’s strings into her extremities aligning the redundant fabric into assemblies of burning witch’s peaks. In rapid freeze-frame and cycles of jumps and landings the core spool of her spine arches over backwards revolving and crisscrossing her stoic shadows with flares and flags of garment fanning rogue bundles of flame perfectly calibrated to arouse a keen reality bursting into flame. Her crescentic and severed angulations violently dominate the stage sending her gown into a twisted maze occupying a mad version of hell that at once dives into the depths and then emerges in angelic repose with wind-blown faceted wings growing like a dervish from her white-blue flaming core.  I sat reeling, dazed like a student of Mesmer, fascinated by the integration and dissolution of flame unfurling like smoke, then exploding into a carpet of confetti with sparkling sleeves.  The threaded parts from her core flew suddenly and relentlessly into her dress pulled by a prolonged updraft in the grasp of the wind’s strings as a condensation of flesh-tones charged the ribbons of her garment, steering the fringes of a miraculous orange conflagration into the camera’s eye located within a node of focus contained in every viewers eye.  This spectacle continued to rise upward to trapeze heights with a kite’s proclivity.  Waterfalls of gossamer were struck by the sun’s vermilion shouts enveloping meandering light into her studied undulations of waves given birth by hinges in her core that quieted into soft furrows of flame one second and mushroom clouds of synthetic fiber the next as if unleashed by a mad Switchman. The changing colors of lights emitted from the sky and from beneath the floor reveal the winds of prevailing attitudes towards the science of fire as it leaps into disease and the treatment of human ailments.  Her name is Loie Fuller and the blues and yellows of light illuminate the strands of robe into great blinding sheets aflame. Those who ponder the poetry of her dance emerge with insights hidden under the mind’s trap and are returned time and again to the novel questions that uncover the strangeness of beauty as well as the secrets waiting at the forefront of a revolution in the physical nature of atomic science. All within the confines of the  moment we see a melding, a marriage of art and hard science, a blend of dance-poetry and atomic physics, all contained in the gestures and expressions of her unique art.