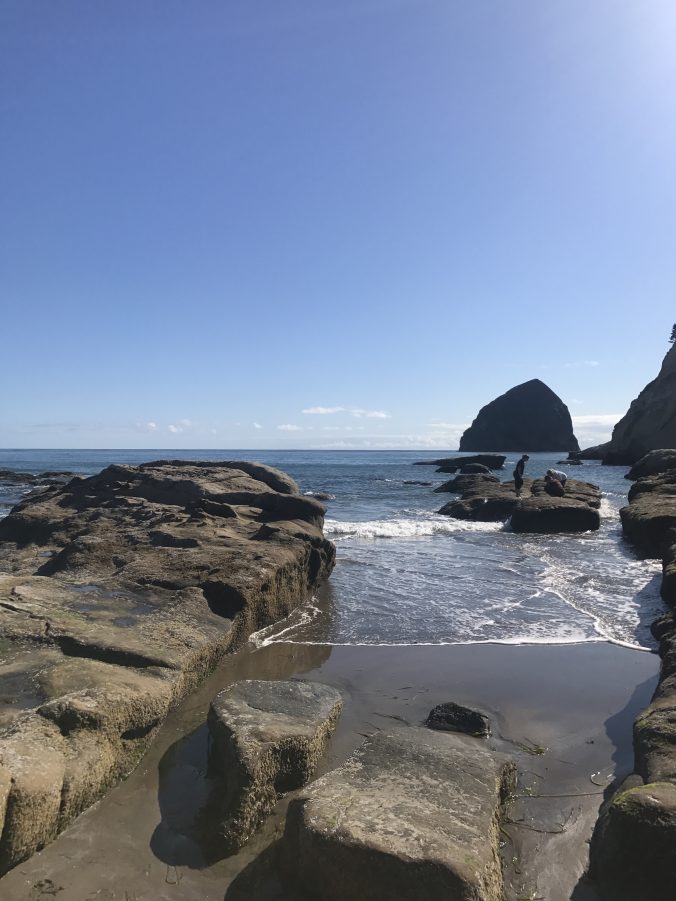 The tugboats are working overtime as the viral pandemic seizes the city. I watch the red and white craft stacked upon itself, built up onto five levels, and piled backwards in its squat dutiful power, like some toy boat found in a child’s playpen now come to life on the quivering river, charged with pushing a massive rust-colored barge, shoving this enormous tanker, from behind along the otherwise quiet expanse of the Willamette river.

Mt. St. Helens and Mt. Jefferson loom in the background. White-capped monstrosities of rock and dirt pictured in the air and surrounded by the blueness of the Portland sky, present like an indelible backdrop to all the mundane fears huddled and momentarily allayed here on the beach; the peaks also unreal and dense with the fantasy of art painted in a dream, almost palpable and intimidating from a distance but, through their inertness, never fulfilling the scope of their imposing majesty.

We both sit on a grassy knoll just above the sandy beach abutting the river on Sauvie Island. A blanket and two towels have been laid down on the grainy grass and we both sit quietly for a moment simply observing the couples with children and the dogs all overlooking a two hundred yard divide of river-water separating us from the other side. I set down my leather tote filled with picnic foods and lay my satchel and colorful sweatshirt behind me as a pillow.

Sher decides to test the water and she kicks off her leather foot-thongs and quickly jaunts toward the water with the brisk urgency that defines how she addresses what is before her. I watch her petite shapely derriere wink and shift as she approaches the river’s edge and she immerses her feet in the water. I can tell the water temperature is cold. She shuffles back as her feet take on a sandy paste peppered with dirt. Her majenta toenails gleam through the tan and black coating, her feet reminding me of breaded chicken breasts, coated with peppered flour and breadcrumbs ready for the fryer.

The tugboat and the object it has been toiling behind glide down the flank of the river and disappear around a bend. Waves wash up gently on the shoreline. Several people are out today disobeying “stay-at-home” orders. Dogs on leashes pull their owners towards other dogs, children with colorful Hawaiian style board-shorts fill pails with wet sand and young couples bask and playfully entwine with each other on towels spread out under the sun.

I look out across the river and see densely huddled pines inched close to the shoreline. The trees are short in height and all remarkably straight and uniform in posture with the occasional bend in the crooked branch but astoundingly and homogenously uniform and these secluded brethren crowd in on themselves and guard some sacred secret within their cascading palisades of green life. Directly in the front row there is one tree with a bright green sign nailed to its trunk. If anything is written on it, the words are imperceptible.

A white ski boat with black highlights motors by blasting its tower speakers. This act of self-aggrandizement seems lost in the clearness of everyone else’s intentions to escape from annoyances and impending questions arising in recent weeks from a crisis at hand. High-pitched children’s voices soon overcome the dissipating growl of the boat’s departing engine and the music fades quickly like a Parisian police siren losing the tenor of its grip on sound over the elongating distance.

There have been a rash of warm days during what is usually a cool, rainy month in Portland. The population has been told to stay in doors and not mix socially. Parks and outdoor attractions have closed their access. We visited this beach three days ago in the late afternoon and as evening ushered in a cold wind we realized we were underdressed and vowed to return in a day or so. The beach was deserted that day. Today is a different story. It is Friday and people are out in droves all with similar ideas, yet there is plenty of space and it is refreshing to have not been barred access or told the beach was off-limits. In addition, the people-watching is excellent today.

The afternoon elapses quickly before our eyes; that lovely phenomenon where two souls together, connected and bonded by so may commonalities, are fused in a moment where there is no time to look up, or look after, or think about and not a sliver of anxiety or fear arises and so time passes in large chunk-like intervals instead of increments and then before long we realize the time has unfolded so rapidly that it becomes immaterial and lost in the poetic intervals of a dream we now have for ourselves.

After we share a late lunch of croissants and smoked salmon with savory cheeses and raspberry jam, we read for a while, then sleep briefly, and then read some more. The dreamy warm air around us, and the moisture from our skin along with sweet smells of breath, all conspire to elevate the day as it drifts into evening. A breeze cools the curves and contours of Sher’s exposed skin prompting her to nestle closer for warmth as the air feels heavier and the clock approaches 6:45.

The evening sets the table for a new mood and as others fold up their blankets and rinse sand from their children’s plastic pails, we find ourselves locking eyes and exploring within each other an already blissful connection that is now amplified by a moment rendering us both speechless with gratitude. Around the periphery, reluctant kids pout as parents throw bags over their shoulders and trudge the hill of sand to the staircase. A yellow Frisbee glides by tilting sideways as it cuts through the clear air and blue horizon.

Sher now rolls back onto her right side with her eyes closed in meditation. I marvel at the curve of her hip and the proud flounce of her bottom as my eyes climb into the network of branches tattooed on the elaborate tree marking her entire back. There is a darkness to the ink embedded under the skin, texturing the bark of the branches, that lets in the lightness of her flesh tones, a rippling of light accentuated by the subcutaneous hills and valleys made by her scapulae and the protuberant spinous processes hidden and all along her thorax.

I roll onto my back and watch. I look straight up above me into the unfathomable infinity of blue space. A sky writer pierces the sky with a white, linear plume of exhaust. I watch as the concentrated density in the blast of writing uncoils from its straight-line imprint slowly thinning and widening into gaseous entropy and blending with the myriad shades of blue owned by the sky until the trail is a vague mist and then nothing but blue with the vestige of what ultimately seems like a smudged cloud.

I pick up my novel and read, shielding my eyes from the waning sun with the book. It is about a man named Ove, a cantankerous old Norwegian man whose behavior as a pedantic curmudgeon is spawned by grief after the death of his wife. He lives in a black and white world ruled by propriety and dogma. He is nothing like me but I find myself loving him and caring about him and empathizing with his foibles more than I would expect. The sentences are short and concise, filled with economy and populated with an array of the spiritual that comes through what is not said. The abundance of simplicity surrounds me on all sides. My reading slows to savor the expansion of what is written into the sacred nature of the unsaid. I ponder the value of silence. I feel overcome by a strong desire to drift aimlessly on this silence as a mission towards finding only the necessary words for the moment.   If the words do not come, I aim to bask in even more silence.

I now roll over onto my right side and see Sher still engaged in her own version of the solitude we have been culturing together. I watch as Sher’s rib cage rises and falls with each breath. I notice all of her subtle unconscious movements: her neck tilting and toes flexing. The almost imperceptible wind caresses a few strands of her hair into an ever so slight elevation that may be static energy. Her hair takes on a slightly darker shade of reddish gold in the dim light of impending evening. I see the impression the bikini strap makes in her back as it winds around to support her breasts. I feel like the same force that coaxes strands of her hair apart also stimulates the goose flesh appearing on her thighs. I reach over and touch the soft angle where her thigh graduates into the curve of her derrier. I try to barely touch her skin but the erotic charge moves swiftly into my fingertips causing me to look even closer as if it might be visible.

Two almost empty containers of raspberry jam sit atop a paper bag that contained two croissants. An oily package that contained three varieties of smoked salmon lies on the blue and white striped beach towel. My beige Converse all-star, high-tops with Andy Warhol Campbell soup cans emblazoned on the sides of the canvas sit with untied laces on the grass spotted around the plastic toe piece with moist dirt. Next to them a pair of silver-framed, mirror-lensed aviator sun glasses sit on an oily napkin sprinkled with croissant crumbs. There are croissant crumbs all over the towels and an almond croissant in its plastic wrapper sits uneaten next to red-handle knife. A burgundy leather tote bag sits on the grass with a package of chex mix, nuts, two apples along with an unopened deck of playing cards.

Sher is now on her left side facing me. She is reading Demian by Herman Hesse. She takes a break and also stares at the red and blue replicas of soup cans on my Converse sneakers. Our eyes meet and we smile that secret smile between two people who realize they have something most people don’t have and pine for while never finding it. The river is now calm and no boats are in sight. The tugboats have finished their work for the day. Another family packs up their belongings and walks along the sand with their grade-school aged boy. I look over at the green sign nailed to the tree on the other side of the river. I ponder the other shoreline once again and notice there is no room for people there as the trees have crowded right up the edge of the water. I still cannot read what the sign says.