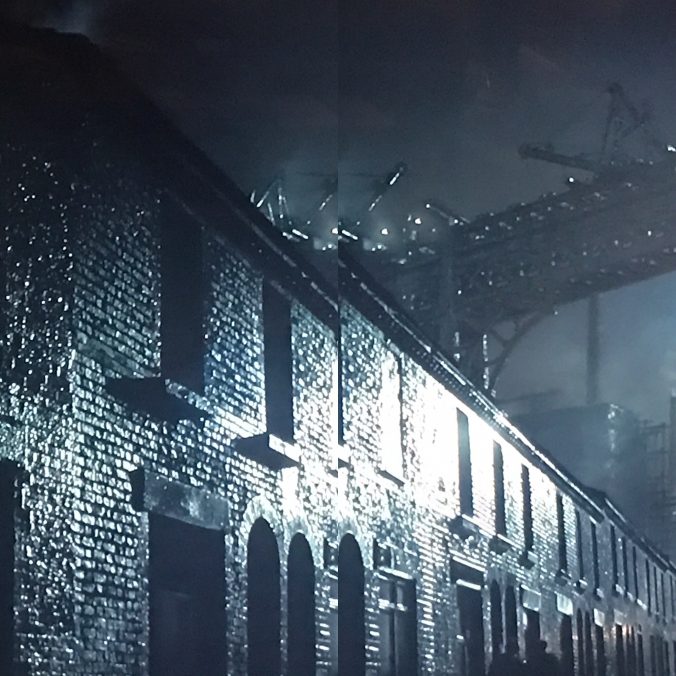 “Its not the caboose, it’s the engine of the train that kills you.”

The weather vane spun rhythmically on the roof. Wind peeled bark off the trees. Chimney smoke slanted sharply off the brick top. What felt like wind was a strait jacket. New ripples in every puddle scolded the eddies. Blacktop was polished clean. All the fractured glass from the time of accidents gleamed and was embedded like uncut diamonds in lacunae frosted into the flattened slicktrack of the road. Cars dug in and fostered a telepathic burn across the imploding town.   Rubber tore on the train’s serrations marked along the city’s arteries. My glance turned faraway before the inside opened up. Alabaster steam rose up from the grilles. I didn’t know where to turn back. The hair on people’s heads was far-flung. Street corner ministers lost their toupees as bibles split open on the sidewalk like kindlewood. The wind frisked me as I walked. Men in rags circled around garbage can fires like bastions of hope. Saliva dripped and curdled on their beards with snot and whiskey dried by the smoke. One man wrapped an oil-soaked rag around his prosthetic arm and lit it on fire like a torch. He was in his heyday. Helicopters whirled overhead blistering the wind and trapping citizens in cones of searchlight. Fear was a third eye washed in factory smoke. The wind carried a white powder that sugared the leaves. Furrowed brows with eye wrinkles and polluted beards found a circle of joined hands around the ash can. Trains clanged with riveting screeches that triumphed over rabid howlings in the desolate night. The tracks running through the city joined people’s scars and ruts connecting residents all there and plentiful with life receding. The steel rooster on the roof continued its metronomic pirouette.  A roster of shoes set outside the shelter stood fast in the wind as if nailed to the ground. Men fought the doors to get inside. Pigeons clustered here and there, some raced into the air and performed nosedives between the spires. The wind brought white specks everywhere. People locked their doors. Those left outside gagged and flushed their mouths as eyes burned cancelling wells of flesh in the orbits. Great timber cross planks fell into place locking onto cast-iron joints. Entrance was barred. Denizens fought back the flying tree limbs. A train filed past derailing itself. The caboose swung off the tracks into play casting about sidelong crushing human forms in its wake. It was a time of machined flesh entering the meat festival. I was witness to this clamoring exit. Fires raged. Madmen stalked the boulevards. Ladders spiked up. Men were tuned inside out. Faces of the brave were torn open. Weapons were not in the equation. It was all natural elements sidling up to the man-made. Nothing out of earshot mattered. It all fell upon a great screen. I sat there and watched until I was pulled into it. This was the last day.