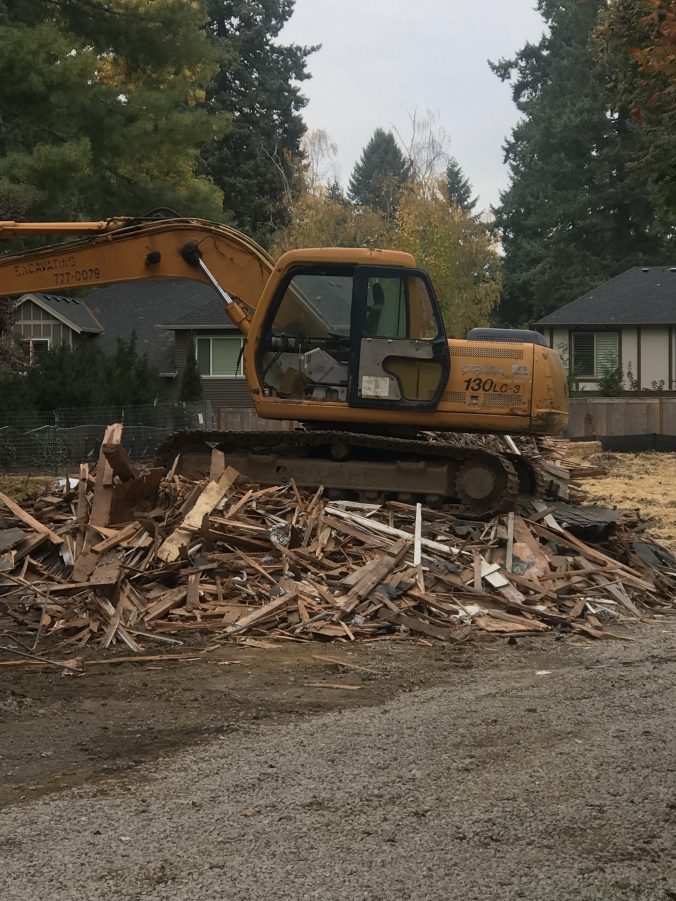 I walked out of a meeting today and stood transfixed in the parking lot watching an excavator tear down a house across the street.   Once I saw the scene I couldn’t move.   I was unable to lift my foot for another step.   The base of the excavator on its rolling conveyor leaned and tilted atop a seven-foot pile of splintered wood and debris.

Its giant frontal jaws on the articulated arm reached and extended with its serrated mouth open like a fabricated industrial tyrannosaurus attacking the body, walls and roof of the house.   Within minutes jagged remnants of splintered wood, and shards of glass, along with the entire roof in one segment, were dragged  mercilessly, crumbling to the ground.   The operator of the construction vehicle was serenely positioned at the controls working calmly like he was sitting at a computer.

I felt unable to avert my eyes.   There were components of my life in that house.   Though I had no relationship with the residence I felt like inner secrets from my past were on display here in a slow-motion calamity being warmed by the sun.   I witnessed pieces of my failed marriage splintering into oblivion.

As the open-toothed bucket on the attacking arm of the wrecking apparatus pulled the roof off in one piece,  I felt a memory of sadness and an inner sense of shame generated from abandoning my medical practice suddenly four years ago.

It was a warm summer Monday morning four years ago.   I was driving into Portland from the Goldendale ranch where I spent the entire weekend drunk.   I drank excessively and continuously every weekend, and most weekday evenings.   It was the unbroken alcohol consumption that weekend that put me into a toxic state of withdrawal with a pernicious case of the jitters.  I was headed into a full day of surgery.   I just couldn’t do it.   I had done it many times before but this morning something had changed.    I was seized by a whole new impulse and state of mind.   Years of hiding and emotional distance suddenly came into my awareness with such acuity that I became compelled,  with no doubt,  to walk away from medicine and heal myself.   That morning I threw away a surgical practice I built up compulsively while sacrificing every other aspect of my life for fifteen years.   This moment of clarity told me, in no uncertain terms, that I was beyond choice and already in mid-departure from the life I had built for myself.

I continued to stare at this scene of demolition before me as if each cracked beam and crushed sheet of dry wall were elemental components of my past life.  The excavator’s jaws crushed through the wooden studs and the tensely adherent stabilizing elements of the frame while crushing sheet rock and shattering glass.   I felt my vision turn inward and clutch onto that Monday morning again where the sun drenched my intense hangover while I drove towards Portland.   I recalled,  like it was a daylight dream,  the sensation of truly having enough of a profession that separated me from my soulful inner life.

I felt splinters from that house being released by the demolition crew like they were alive piercing my flanks and charging my bloodstream with an adrenaline load that beat the musculature of my heart at the cellular level.   The sensation was the same feeling I had that Monday morning when I called my operating room nurse and informed her of my intentions.

My mind was now split between a dream state and the here and now.   Planks, shreds of broken wood drifted into the rays of sun, mixing with the powerful autumn reds that dominated the color palette of the street.  The walls of the house were collapsing along the sides of my vision while window frames with crushed glass like gemstones sparkled in the glare and reflected back at me memories of earnest self-destruction.   As the jaws of the excavator’s bucket savagely tore into the sidewalls after the roof was off, I devoured myself in thoughts of self-sabotage that I never believed I was capable of.   These thoughts all crowded in and came alive with a hidden sadness that was quickly overshadowed by current feelings of extreme joy in this very moment upon witnessing the final stages of the home’s degradation.

I now imagined myself inside the remains of the crumbling residence as a human wrecking ball.   The drama of the final stages of collapse brought forth, in my mind, a litany of unhealthy relationships.   I stood within the chaos,  confused yet awestruck,  firmly entrenched on the foundation surrounded by scattered hemlock and oak beams and plaster-rock, feeling a drenching spirit of love lost, then gained, and lost again, then gained again, always lost in the end.   The firmament under my feet  then began to sink like quick-sand and the pick-ax,  that tool of destruction in my hand,  suddenly floated away like a child’s kite let go.

I gathered myself and consciously returned to the parking lot intently witnessing the spectacle like the information I was taking in was vital to my life. Now in the final stages the excavator rolled and snapped on an increasing mountain of debris, tilting and threatening to topple,  its military-grade base, like a tank, securing the entire apparatus on this unstable platform of splintered wood and shattered memories.

A friend from the meeting joined me and laughed at how absorbed I was in this destructive spectacle.   Soon he was frozen in place, focused, in the moment, with a desire to operate this mechanical demolition tool.   We wondered where the real wrecking ball was.

In the end there were no wasted motions.   This device never paused or hesitated.   Every gesture, and movement was deliberate and integral to the blasting feast upon the home’s core.   Another friend drove up and stopped, watching intently from his car with a smile on his face. He simply added:

I felt an intense dream-like sensation of gratitude realizing we were all connected and carrying very similar emotions inside us.

A Coffin Floating on the Ocean