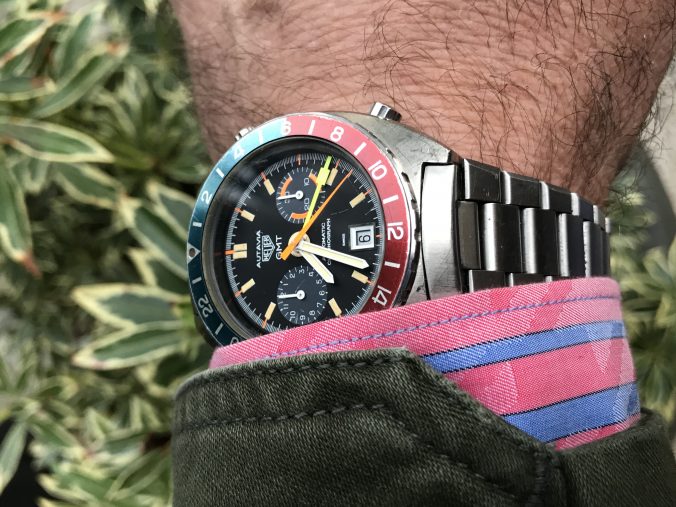 When my eyes scan down to check the time on this Heuer Autavia GMT Chronograph, I think of Jimi Hendrix with a choke-hold on his ax, wearing a  psychedelic, multicolored military jacket.  He is standing on stage operating his stringed instrument powered by an amplifier as if he just landed here from another galaxy and needed to employ it for communication.  Right at the same moment, a candy-apple red GTO tears up a side street.   The planetarium fixes its lunar star lights onto a stage back in time.  I hear a screech and the whip of sweat-riddled hair from Janis Joplin while catching a visual of your father’s comically wide orange and harvest gold tie.  Radioactive yellow reaches out from the watch’s phosphorescent dial alerting everyone that neon had no curfew in the 1970s. 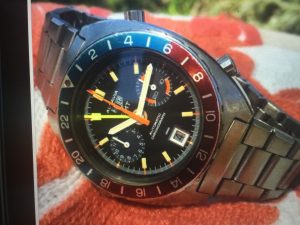 A certain charge and mystique take possession of this watch filling it with inspiration the day it was born.   The manufacturers made sure they created a misfit that would not hold up in today’s technological jungles of preordained obsolescence.  Newly engineered in 1973 with an automatic chronograph movement, the Calibre 11, it ticks along with a spare time-zone to boot.   The Heuer 11063 is an amalgamation of all things 1970s.  Colors do not pretend to blend and match, a clash of red and orange suggests space and tolerance for what does not fit preconceived notions.  A rebellious air vibrantly decorates and mutates its aura making it a true and honest emblem of an era.  Going back in time you can drum up any number of side-kicks from this disposable era that left little for posterity,  with its lack of visual recordings.  Analogue was all there was, along with paper and manual knobs on the TV and rotary phones.   A time where litter and pollution were part of every big city and no one cared least of all the street cleaner who scattered the street debris onto your lawn.   Instead of wearing a seat belt you fought to see how many teenagers could fit into a VW Beatle and still drive or you stuffed stooges into phone booths for a laugh, now on occasion you see a broken down phone booth among the detritus piled up after the wrecking ball swings.

This is the beauty of unleashing memories attached to the era when this watch came into being.  Heuer was one of the competitors who partnered alongside Hamilton, Breitling and Dubois Depraz, all of whom collectively designed a movement that raced against inventions put forth by Zenith and Seiko for the honor of being the first automatically wound chronograph.  The watch discussed here is a couple of generations newer and includes a GMT complication but it remains a close relative when it comes down to the brass tacks of the original automatic chronograph.  Up until 1969 there were many automatic watches in existence, pieces that underwent self-winding during the natural movements of the wearer, but all chronographs had to be manually wound.  There is quite a bit of interest,  among collectors, that focuses on the steel sports chronograph models of the mid-late 1960s, just before the automatic chronograph was born,  and the early 1970s when there was a flurry of production aimed at the automatic chronograph.  I also devote a significant portion of my collection to both manual wind and automatic chronograph watches manufactured during this fascinating period in vintage watch history 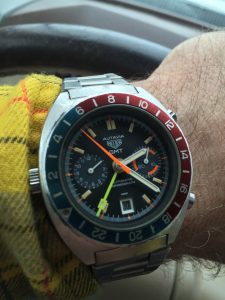 This Heuer Autavia GMT Chronograph knows there were no computers when it was born.   Its winding crown is on one side and chronograph pushers on the other side.  The dial is a matte dark slate-gray, neutral like a tabula rasa for all the colors and design flourishes to be added.  There are six hands in total, each with a specific assignment as the dial is balanced with a rectangular date window at 6 o’clock and two chronograph sub dials at 3 and 9 o’clock, the minute and hour totalizers respectively.  There is a colorful, driven, urgency to this watch and it stands proudly on the wrist with a diameter of 42 mm and width of 14 mm, more reminiscent of a watch that Stallone would wear in the early 2000s.  Size and stance aside, there is no doubt this is a product of the 1970s and it can easily serve as an honest representation of 1970s style and sensibility in general.

The fact is, this watch on my wrist makes me happy.  Digressions mix with dreams  and brightly photographed magazine displays to embellish the parade that was out there when this watch came into being.  Jim Morrison’s lizard skin shirt, black leather pants and chelsea boots were on album covers and magazines but when photographed by the omnipresent Andy Warhol ,wearing albino glasses, the gentle descriptions of freedom came true.  Warhol with his Cartier Tank once directed an 8 hour film called “Sleep, ” about a man doing nothing but sleeping. Such was the tail end of the 1960s and early 1070s, for some a giant snooze-burger, for others the only real, honest life lived in the 20th century  .    Propriety got out the way to usher in renegades of individuality and the terminally unique.  Those high on the idiosyncratic scale flourished because all the cross-currents and juxtapositions found their soul-mates of style and came out of the closet to accept incongruity.  Incongruity is funny and it makes you think and just when you realize two things don’t belong together two decades go by and you can’t imagine peanut butter without chocolate.  That’s why I like the Heuer Autavia 11063 GMT Chronograph.  It’ too big and thick on the wrist,  it’s for pilots but not discrete enough for pilots, it is loud and colorful like an Italian race car driver from Milan but it doesn’t have the delicacy of a Paul Newman Daytona.  It hijacks the pepsi bezel from Rolex then it outdoes that color scheme with florescent yellow and orange that seem to belong on a different watch altogether. 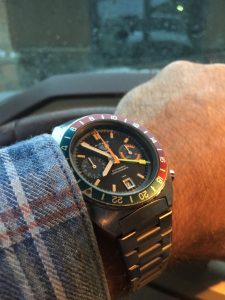 I can’t help  but reminisce  here.  The electric kaleidoscopic dance-step shock-waves course into my bloodstream pulling worlds together in the moment, finding the juice to hail back into another time that feels like yesterday’s child, sneaking away to crash his first concert ever at the “Garden,”  with the rest of the teenage misfits jut trying to fit in. That was a night.  Flying high on qualudes and malt liquor, the mescaline just kicking in as the “Village People” take the stage.  Boys wanting to imbibe all of life at once and graduate into the realm of cool that very instant, against strict parental orders, away from all  corridors of safety, oblivious to the dangers raining down.  There was security in numbers.  Ideas hatched from the forbidden zone, coaxed into place and made OK by the gyrations of teenage rationalization born among and between all involved without thinking of permission because forgiveness never failed to save them.

Then another story comes to mind. You catch an opening as the subway doors part and there he is again blind with the tin coffee cup rattling change scaring the children with eyes burned shut like a mad surgeon closed off his world for fun so that now all he does is repeat Jesus over and over opening sliding doors between subway cars and when we all hear the rapid gust followed by the door slamming it is clear another angel survived a terrific hailstorm of progress only too happy not to see where the world is going. 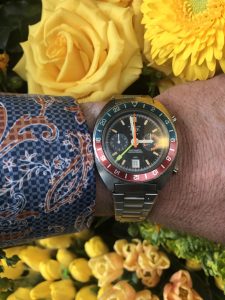 Then a boy leans over and asks his father next to him why he feels scared when the blind beggar walks by.  All the clamor, unsteady footing and peculiar facial expressions instill fear inside the claustrophobic subway car, while all others look down or away and into newspapers while the boy’s eyes never leave the poor man,  transfixed and enveloped by a miasma of gestures performed by the blind man, dramatic act or unconscious vestiges caught in a reflexive arc removed from the voluntary arsenal of movements, deliberate or beyond his control? It makes no difference.   A part of the boy  believes maybe the man can see and he will notice the stares and spring toward him suddenly and without restraint allowing all the pent-up troubles to bubble over.

The father’s arm wraps around the boy’s shoulders and a prayer settles over them both.  The father fears nothing and the boy feels this as he nestles into the embrace.  They are going to the opera,  the Metropolitan opera to see “Rigoletto,” with the great baritone Placido Domingo in the lead.  The subway offers a real dose of life on the way to an escape from the world, into the red crushed velvet curtains and tuxedos surrounding jeweled women elegantly shuffling in heels on the arms of masculine gentlemen sipping fine spirits on the balcony.  On the way they pass street walkers and peep-shows and three-card Monte confidence men all with a smell of rotting fish stale beer and cigarette smoke that mixes with the steam coming out of the grates. Then suddenly there are the stairs and the columns leading up and into a sophisticated parlor of elegance with hors d’oeuvres and mink stoles.

It is almost 8 PM and they enter the auditorium and take their seats.  The boy skims the program.  He does not know the story so his father provides him with the Cliff-Notes summary.  The boy knows they will go to Katz’s delicatessen afterwards for pastrami sandwiches and chips with a giant dill pickle from the barrel.   The boy wishes the opera would just hurry up and be over.  The great auditorium darkens and spot lights expose the stage.  There are no empty seats.  The boy surveys his environment as the father leans back, with fingers interlocked on his abdomen drinking in the sounds he loves so much. Placido Domingo walks on stage and the show begins…