I sit down inside Starbucks by a great plexiglass window to people watch. I pour half a pint of vodka into my ice coffee. The window gives me access to the people walking on SW 10th Avenue during the lunch hour.   No one looks back at me.  I feel like I am on the other side of a one-way glass that detectives use to break down suspects during an interrogation.

Everyone seems to be walking toward private fears.   I see a morass of integrated humanity, a continuum that, if put to celluloid, could easily absorb a seasoned filmgoer.  A rolodex of caricatures floating by on a wagon toward the big tent performance.  A delicate drizzle coats pedestrians with a warm icing no one cares to notice. Rain does not alter the posture or gait of the walkers in Portland.  No one lowers a head. 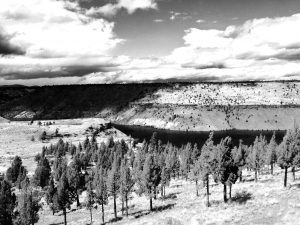 The person next to me in the café has a locked-on stare out the window. She is having an absence seizure. The act of following the cadences of gait has hypnotized her.  Following person after person, across the window, with their metronomic gait patterns, has a mesmerizing effect until it seizes her and suddenly she disappears and goes absent. Her eyes stop following the people and sleepily focus on a square of sidewalk. There is an unresponsiveness and catatonia for twenty seconds, then she returns and her eyes resume their incremental lateral to medial gaze as if she is watching tennis. This happens again a few minutes later. Where does she go? She appears unaware of these spells. I imagine holding a charm on a chain, ticking back and forth before her eyes. I could have commanded her into any memory.  Perhaps I could have coaxed her to do anything . For a while I ponder the possibilities, then my thoughts return to the procession.

The pedestrians continue to fill my field of view as the vodka kicks in with a warm mental buzz that gives me an open mind and sense of ease.  I feel an inspired sensation that makes me feel both gauzy and crystal clear. I see things and think thoughts that otherwise would not come to me. The parade is both nostalgic and distinctly modern that even the transvestites have Grace Kelly’s fashion sensibility.   Portland proudly announces itself as a nucleus for the terminally weird and today is no exception.

Just then,  Bluebeard ambles by dressed in baggy pink chinos way too short and a black T-shirt that is swimming on him.  He wears sneakers that are an off-brand replica of “New Balance” running shoes.  His strides are long and deliberate with one leg gathering more ground than the other.  A gait so unique it could be an identifying feature from a great distance, even before you notice the blue beard.

Bluebeard is a character who surfaces on the streets of Portland now and again. He has a beard that extends down to his nipple line and is dyed royal blue. He invariably steals the show when he walks by and even my neighbor now shifts her gaze acutely and with emotion after she notices him

I remember my mother reading me the story of Bluebeard as a child.  It is a fairy tale about a powerful and nefarious lord who marries and kills six of his seven wives.  He is a gruesome and monstrous man but is able to lure women with his great wealth.  He warns each, in turn, not to look behind the door to one of the rooms of his castle.  Each wife is given keys and has permission to view the rest of the castle and every other room without restrictions.  The sense of curiosity is too great for each bride and when we follow his final wife as she looks behind the door, she finds the corpses of the other dead wives.  On a more positive note, his seventh and final wife narrowly escapes Bluebeard’s attempts to kill her and survives.

As I sit and contemplate having just witnessed a modern-day Bluebeard on a lunchtime stroll, I consider the deeper meaning of this tale and the point this strange individual is trying to make by channeling the spirit of this murderous folk symbol.  Certainly, it seems, the story is telling me to temper my curiosity and to be aware of the temptation to explore forbidden areas of life.  But there must be more to it.

I stay on this thought-thread and consider a more psychological theory of this myth.  If the castle is a metaphor for Bluebeard’s mind, then there are rooms and compartments that we expose to the outside world in the form of different aspects of personality or behavior.  Most all of my castle, my personality, is on display for others to see and visit.  There are certain areas of the mind, represented by the one room, that I would never choose to share with another; certain thoughts, ideas, fears or unconscious aspects of the mind that I would not allow anyone to see or visit. The off-limits room could be the unconscious mind in general which can be terrifying in its deep mystery and unpredictable content.  Perhaps it is that part of my mind and thoughts that would drive anyone away if they were to be exposed to it.  The death of the wives is simply another metaphor for the fact that once exposed to Bluebeard’s deepest innermost dark side and demons, they would be unable to tolerate him or coexist with him.

Perhaps our modern-day Bluebeard has had five, six or seven difficult marriages. His tremendous beard dyed in royal blue harkens back to a mysterious and iconic French fairy tale that alerts those around him that he is impossible for women to get along with.  He wears this warning on his sleeve to forestall any possibility of an inchoate relationship. It would be impossible for a woman not to notice this symbolic flourish and in doing so he is expressing a rigorous type of honesty concerning his eligibility in this arena. The possibility also crosses my mind that our friend simply enjoys the color blue and simetimes a cigar is simply a cigar as Freud would say. 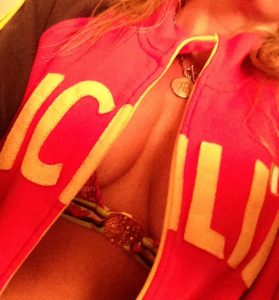 Just then my attention is diverted.   A woman walks by holding a magenta parasol and wearing a black dress.   This is curious considering the sun is hidden by the clouds, the rain has stopped, and the utility of this sun-resisting accessory is far outweighed by her sense of outmoded style.   I notice a man emerging from the Governor Hotel and she quickly runs toward him and gives him a one-armed hug and kiss while holding the small umbrella over both of them.  They are a handsome couple. There is a delicious, intimate familiarity to how they touch.  He is dressed as a dandy with a tan fedora and mohair suit with two-tone wingtip shoes.  She has prominent ears, and her eyes survey everything in a way that makes the rest of her bloom.  She walks with a confident stride folding her arm into his.   As he looks straight ahead, she is peculiarly aware of her peripherals to the point where you know her senses do not miss a trick.

Her tight dress hugs her shapely hips and her glossy white legs migrate down to contoured muscular calves that wink above her high heels.   A simple sample or maybe a feast for eyes that have hackneyed entanglements, she attracts a sane partner with a forever gaze that burns during these moments before a full exposure occurs and the undress of the soul reveals all that temps and all that corrodes.   She carefully avoids the stereotype of torn jeans and tattoos, while her falsetto yearns above all operatic scales.  After the scene and the sane couple return home, she vanishes back into the girl she is, never wondering what men really think.

I stand up and notice my neighbor is now reading a newspaper.  I feel a little light-headed but it is not unpleasant.  I drain the rest of my ice coffee and drop the cup in the wastebasket.  I throw my shoulder bag on and walk back to work.

The Carousel of Man’s Innocence